You are here: Home / News / Congratulations To Sije Victoria Kofman! 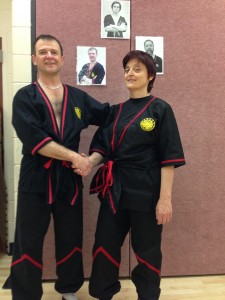 Congratulations to Sije Victoria Kofman on her promotion this week to Primary Level Technician in Leung Ting WingTsun® Kung Fu!

In Leung Ting WingTsun, this is an instructor rank equivalent to achieving a 1st Degree Black Belt in other martial arts.

Victoria is the first woman to be promoted to this level from our Wheeling, Illinois class.  She is an instructor in Wheeling alongside her instructor, Sifu Guerman Atanassov.

Leung Ting WingTsun is a perfect martial art for women.  In fact, according to the oral history of WingTsun, this kung fu system was created by a woman and her first student was a young woman.

It is a well thought-out system for teaching people how to borrow an opponent’s power and turn it back against them… perfect for a woman who might have to defend herself against a larger, stronger male opponent!

Victoria’s journey in WingTsun began once upon a time with a trial summertime class.  She could hardly have anticipated that the training would develop into a life-long passion.  But her dedication has led her from a beginning student to an instructor level.